skip to main | skip to sidebar

I've thought a lot about this race report since I finished the race and I've been struggling with it. This race was not a good one for me. It was a great race - great volunteers and the best race t-shirt I have earned. I love running at WyCo. But for me personally, it was a low spot.


I swore that I read somewhere the start time was 8:30. We showed up to the park at 7:55 and parked a quarter mile away since the place was packed. It turns out the race actually started at 8. We hustled to the start and took off at 8:12 by my watch. I didn't get my laces tied tight enough and later paid the price dearly. Way to go, starting off frazzled already. John didn't get certain sensitive areas lubed up and he also paid the price. Needless to say, my head was not in this race.

The first half of the first loop was fine. We saw several people who obviously weren't drinking enough and were in a bad place. Twice we heard sirens and we found out later 2 people went to the hospital with heat stroke.

About halfway into the first loop, John and I had a little "disagreement" which resulted in me getting ticked off and dropping a few f-bombs, which is pretty out of character for me. That completely sapped my energy and lowered my mental state even farther. At that point I just wanted to go home. By the end of the race we were fine, but that little argument was a serious blow to my energy and psyche. When we're clicking together, it's great. When we're not, it is utter disaster. Maybe that's why you don't see many husband-wife running teams. The last 3 miles of the first loop were awful and I had all but convinced myself I was quitting after 15.


Dropping out of a race is something that I have thought about during every long race. Wouldn't it be nice to stop? But it's not something I ever take seriously. I also have grand delusions of setting new course records or qualifying for National Championships or securing my place as Supreme Empress of the Universe, so I know my mind tends to wander across the full spectrum of possible, if not plausible, outcomes. There were no grand delusions during this race, but the temptation to quit was following me around like a Great White shark that could smell blood in the water.

I saw a few familiar faces at the finish/aid station and that gave me a desperately needed pick-up. I gorged myself on cold Mountain Dew, and took off again. Less than 1 mile out of the aid station, the Great White shark was back. You can still turn around. No one will fault you. The sun had come out and the humidity was brutal.

The aid stations were awesome, as always. The second loop all I could do was run from aid station to aid station where I could refuel, cool down, and get some positive energy from the volunteers. Bags of ice on my neck and head were exactly what I needed to keep my core temperature under control. Hot/humid weather is a weakness of mine and I'm fully aware of it. My stomach was on the edge the last 8 miles, and threatened to go over with little provocation.


We shuffled most of the last loop. We caught up to Jonette, who has kicked my butt in the last two ultras I ran. I stayed behind her for a mile or so, still trying to figure out how I caught her. It felt weird to pass, like I was begging the Trail Gods to strike me down where I stood. This is not a position I should be in. She is an awesome runner. Once I passed her, I had to just keep my eyes ahead and keep moving. Relentless Forward Motion. At this point, I had picked up some resolve to finish as best I could.


When we made it to the Triangle, my already mushy brain started throwing me some curve balls. Like why was the polka "She's too fat for me" in my head? When I tried counting hours on my hands (because I could no longer perform simple math) the numbers didn't make sense. Then I realized I actually only have 5 fingers on my left hand, not six. I wonder if I could strap box turtles to me feet and have them carry me in. The humidity was really getting to me.

Between not having my shoes tied tight enough, and having to break for other runners on the downhills early in the race, I had picked up some of the worst blisters I have ever experienced. My feet felt like hamburger. I considered cutting off both pinkie toes; they were doing more harm than good at this point.

The last 3 miles again were awful. John took off, so I was by myself. Then, on one of the uphills, my lower intestines churned and cramped and all I could think was "Oh Sh!t". Literally. For a while I debated trying to find an area to stop, but with a few miles left I thought that may lead to some chaffing I would rather not experience. And poison ivy and nettles on my bum did not sound like fun either.

The last two rocky downhills made me grunt in pain, but at least it was a distraction from the lower-intestine issues that were not going away. I kept hearing phantom footsteps behind me. I noticed this at Free State, too. Maybe it was a Trail Angel sent to give me a kick in the pants, but every time I turned around to check no one was there.


I finished in 7:08 on the clock, 7:01 by my watch. I gave my water bottle to Sophia and hobbled as fast as I could to the nearest porta potty. Disaster averted. Somehow I finished 3 minutes faster than my winter Psycho Wyco time and was second overall female. I don't feel like I deserved either one.


This was a learning experience for me. The Dark Side of ultra running, if you will. I clearly still have a lot to learn, which is what will keep me coming back. If I take anything away from this race, it has to be that a negative outlook will ruin a race much faster than bad weather or inadequate training. And always double check the start time of a race.
at 12:20 PM

We love ya Sam!! You looked hot hot hot!!

Sam
I'm a mom of two, trying to figure out who I am and who I want to be.

8 weeks pregnant and running in costume 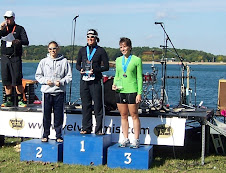